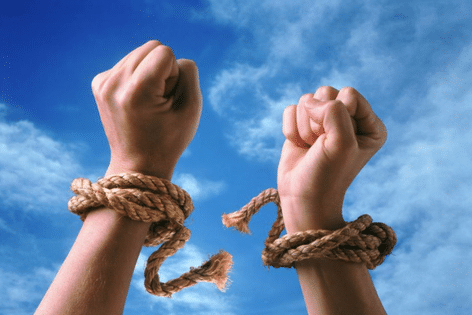 As her pain spun out of control, she understandably became more and more fearful.

“What if it never stops?”

“What will my future hold?”

She was caught in a tailspin of fear, pain and sadness. Suddenly she stopped and looked out the window.

“This is familiar.” she stated. “I’ve been here before.”

I assumed she meant that she had been in unmanageable pain before and was recognizing this was not the first time.

She went on to explain that, no, that was not the train of feelings she was on. It was the same out-of-control feelings she had as a child when her parents fought.

Mary (I will call her) was raised in an emotionally and physically abusive family. Her father was an alcoholic who came home drunk most nights and, as she hid in her room, she listened to his terrifyingly violent rages at her mother.

This felt the same. The pain, the unbelievable tension and the out-of-control fear.

As we processed this memory, Mary felt and expressed emotions that had been blocked, barricaded and locked up in her body for decades. The emotional pain had surfaced to a point that it could no longer be contained physically and was looking for a safe outlet.

This was the first of many sessions of unlocking and releasing the past trauma that had been held so tightly by that little girl in her bedroom. Slowly but surely, Mary began to relax and find more ease physically. Her chronic pain did not disappear but it was reduced to a point where she could manage it, work with it, and find ways to navigate her life around the pain.

If we can’t shake it off, feel it and release it safely and without judgement, it has to find a place to live somewhere.

Animals in the wild instinctively shake after being chased by predators if they were lucky enough to escape. They don’t judge themselves. They don’t hesitate to do exactly what their bodies are calling them to do in order to heal.

The relationship between the body and the mind is no longer just a connection. It is actually the same thing, just different outlets of the same system.

What we think, we feel. When we feel, we think.

Now what if we could just feel without judging our feelings?

I don’t know how we have become so harsh with ourselves for feeling when it is such a natural process and so rich with experience.

The truth is, the energy of emotion has to go somewhere, and I promise you, it is not as scary as the mind might tell you. There is nothing you can feel that you cannot manage.

Your choice: to feel what is arising, with huge compassion and a loving container of mindfulness to hold it, or to store it somewhere for later.

That guy that road-rages? What if he could notice the frustration in his hands, the tightness in his chest and the unresolved grief he holds?

That woman that is always so grumpy? What if she could feel the weight of her sadness in her stomach, the loss in her heart and cry out her fear of the future?

Try it now: We have to be still enough for the energy to actually catch up with us and rise. Breathe deeply. What do you notice? Can you stay with it, with a loving heart until it passes, or get support to talk it out and heal?

Go slowly, gently and one piece at a time. Get support.

But you are the only one that can do it. You got this.

Fear to Freedom: Reclaim Your True Self

6 thoughts on “Fear has to go somewhere…”